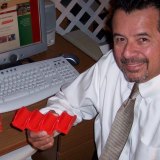 Hi folks! I'm Nick Dominguez. When I was 15 I began working a summer job at my Aunt Petra and Uncle Dave Alvarado's Casa De Tacos Mexican Restaurant in Kansas City, Kansas. Uncle Dave's tacos were delicioso! That was my first encounter with 'taco turnover' and 'the balancing act'! We'd crumple a small piece of foil and position it on either side of our tacos to hold them upright as we carried them to the table.

Many years later my Mother gave me a set of taco holders that she'd found. I later discovered that they had been distributed by Tupperware. You may have seen these. They were white-ish with a drip trough and a little lip on one side to hold it by. I thought that the design, while functional, could have been a bit more imaginative.

At some point it occurred to me that it would be neat if taco holders could be joined together, so that you could serve one, two, three... I thought the base might be used to accomplish this. I drew some pictures, carved some out of wood--painted them red and green. Then, like a lot of folks who think up stuff to improve an existing product, I imagine, I tossed them in a drawer and forgot about them for a decade or so! I figured I'd do something with the idea one day when I got a 'Round Tuit'. 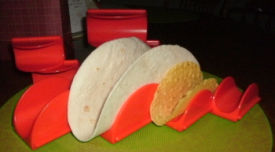 Along about 2004 -2005 I decided to show my carved wooden 'proto-types' to a friend of mine whose company specializes in manufacturing and product development-- Mark Preisinger (website: www.mark8globalsource.com ). I thought at least he'd get a chuckle out of it. Instead, Mark helped me get professional drawings, a real prototype, a manufacturer... It all seemed feasible so I 'went for it'. I remember when the truck pulled up and unloaded the first 50,000 TacoStandUps. I thought: what have I done!

Since then we're pleased to know that our handy little problem solvers have found their way to the tables of taco lovers in all 50 United States and: Australia, Barbados, Belgium, Canada, Cyprus, Finland, Germany, Iceland, Ireland, Japan, Korea, Netherlands, Norway, Portugal, Puerto Rico, Sweden and the United Kingdom--so far! 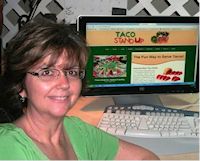 With over 10 years now, Dominguez Innovations/TacoStandUp is growing steadily. Now that my wife Tammy is devoting more time and energy to the venture, I'm confident her creativity and input will contribute greatly in helping us reach our goals.